AN UNEASY YOKE FOR VETERANS 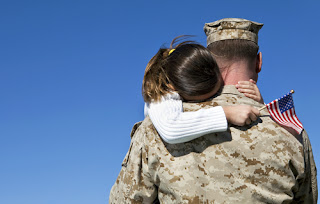 My late Mom, who died in 2006, bristled at how intensively our government was using Reserve and National Guard troops as a mainstay for the wars in Iraq and Afghanistan.

Mom knew about the costs of war. She served as a family service volunteer with the American Red Cross beginning in World War Two and continuing through Vietnam. Her job was to help GI families deal with the exigencies of military service. She saw what war does to GIs and their families and she helped them.

In recent years, every time the news announced a new rotation of our “weekend warriors” into combat she grew angry. Why wasn’t a regular career military force shouldering these responsibilities, she asked? Or why not face the issue of a draft and more equally share the load?

Now some adverse consequences of using our Guard and Reserve women and men in such an intensive role are becoming painfully obvious - among them startling rates of unemployment.

Veterans aged 18 through 24 have an unemployment rate of 37.9%, says the Economist magazine.

Iraq and Afghanistan veterans overall have an unemployment rate of 11.1%.

Compare these with a U.S. national unemployment rate of 8.6%.

Moreover, 1 in 3 homeless men is a veteran says the magazine.

Clearly we have not considered seriously enough the personal and social consequences of sending our young men and women reservists to these wars. Mom was thinking about these things even at age 94, and I am sure she prayed about them.

Perhaps we other generations should ponder and pray too. We surely should go forth as a body of citizens and help our wounded warriors – those with wounded bodies, minds, families and careers.

Also, if we must go to war, let’s consider a better way to share the load.
Posted by Douglas Smith at 9:29 AM