Disabled Five Months, Then Worked for a Lifetime

Allan Tibbels suffered a catastrophic spinal cord injury at age 26 that left him a quadriplegic. Though drastically impaired, Allan said he was disabled for less than five months. Despite his weakened limbs, Allan worked for the balance of his life till he died in 2005 at age 55. 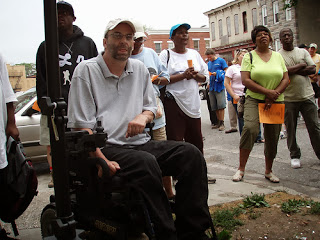 “He couldn’t lift a hammer, but he rebuilt a neighborhood” said the New York Times Magazine after his death. The Times continued,

“Over two decades, a man who couldn’t lift his arms built 286 houses.”

Allan was co-director for Habitat for Humanity in Baltimore, Maryland.

I first heard about Allan in 1998 when I was publishing a quarterly newsletter about Social Security disability programs. I asked him for an interview. Sitting in his office in his electric wheelchair, he related how he had applied for SSDI when he was injured, but dismissed the application and returned to work less than five months later. He referred to that period as “when I was disabled.”

Allan attributed his rehabilitation to God, support from his wife, family and friends, and a great workmen’s compensation insurance policy provided by his employer. The policy got him into the rehabilitation process promptly after his injury.

I know of no success story like that of Allan Tibbels among the people who I’ve represented in obtaining SSDI benefits. I know of many who’ve tried.

Many of my clients who won benefits wanted to work, but expressed fear of losing disability income and health care benefits if they tried and failed to keep a job.

These days the news media is getting cranked up over the increasing number of people applying for SSDI and receiving benefits. Many writers are obsessed with unscrupulous applicants, lawyers and doctors who they believe are abusing the program.*  Fewer publications give attention to structural factors that keep people on the disability rolls who might work.

A serious appraisal of the SSDI program should include looking into poorly understood structural flaws that keep beneficiaries with future work potential on the disability rolls out of fear – reasonable fear in many cases. More people working themselves off the rolls would bring significant relief to this financially stressed program.

The SSDI program needs structural changes to encourage disabled individuals with potential for recovery to try working. These include:

3. Reducing costs elsewhere in the SSDI program to offset additional costs incurred for the above (for example, by giving applicants the option to choose time limited benefits in return for getting their benefits sooner).

Receiving immediate VR and healthcare benefits would stem the decline of many disabled workers and hasten their return to employment. It wouldn’t rehabilitate everyone, but would rehabilitate many and inspire others to keep trying. I hold this opinion based on thirty years experience providing legal representation to SSDI beneficiaries – many who were highly motivated to resume work when they first received SSDI benefits.

Let’s correct the structural flaws in the SSDI program even as we increase efforts to thwart abuse. Let’s go as far as we can toward providing immediate VR and healthcare benefits. This will motivate more applicants to approach SSDI like Allan Tibbels did, expecting to resume work. To many such people SSDI will become a way station and not an ultimate destination, and more funds can be directed to the people who lack the option of work.

* For example, Chana Joffe-Walt of NPR said 14 million people get a disability check from the government each month. Social Security Administration figures show 8.9 million disabled workers receiving SSDI benefits as of August 2013. If Ms. Joffe-Walt is referring to SSDI, she is mistaken. See Joffe-Walt, Chana (March 22, 2013). Unfit for Work, National Public Radio. Retrieved September 17, 2013, from http://www.opb.org/news/article/npr-unfit-for-work-the-startling-rise-of-disability-in-america/. See also, Rosiak, Luke (July 30,2013). EXography: Many disability recipients admit they could work. Washington Examiner.  Retrieved September 17, 2013, from  http://washingtonexaminer.com/exography-many-disability-recipients-admit-they-could-work/article/2533626. Mr. Rosiak stated that benefit recipients in the Supplemental Security Income (SSI) disability program “have more pain” than those in the SSDI program, a statement I find hard to take seriously. These articles have been widely circulated, republished, and referred to despite their obvious flaws.

Posted by Douglas Smith at 11:02 AM No comments: