Actually, with Tom there’s a third alternative – catch and cultivate. Tom not only returns fish to the stream, but he cultivates streams so trout can live long, healthy, and happy lives. Among other things, Tom and others of the local Trout Unlimited chapter check water quality, clear fallen trees and debris from streams, and maintain the adjacent habitat.

Is there a spiritual parallel to piscatorial catch and release?

As a person called by Christ to make the gospel known, should I aim only to catch and release people?

I mean, push a Christian book or pamphlet at them and let it go at that?

Or is it enough to walk away after telling them: “God so loved the world that he gave us his only son, and promised that whoever believes in him shall have everlasting life.”

I think it's better to support words with actions. I mean, become a better friend and give people an opportunity to see if the gospel is real in my life and the lives of my friends.

I don’t know Tom’s religious convictions, but he and Trout Unlimited are motivating me not only by their friendliness, but also by the way they carefully and consistently care for their fish and their streams. May I be similarly devoted to the people around me.
Posted by Douglas Smith at 6:54 AM No comments:

My father, an avid fly fisherman, told me Atlantic Salmon do not feed when they return to fresh water from the sea. I asked, "Then why do they strike a fly?"
My Dad shrugged and replied, "A lot of people think the fish are angry at the fly intruding on them; others think they strike instinctively out of habit formed at sea when they were eating." 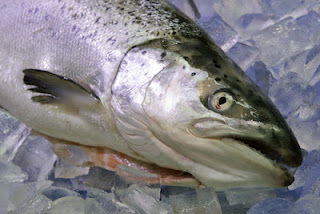 Perhaps today's office-seeking American politicians should ponder the fate of many salmon who strike fishing flies: striking out of anger or habit (or an exaggerated sense of self-importance) can get you caught, cooked, and eaten.
In salmon, the fundamental need to get upriver and spawn can be thwarted by indulging piqué. Isn't the same true of presidential election politics?
Posted by Douglas Smith at 3:20 PM No comments: