In the late 1960s I became impatient to see a new World War 2 movie, “Battle of Britain.” The attraction was seeing actual British and German fighter planes reenacting the “dogfights” of 1940 in the British skies. Finally it opened in a theater near me.

The dogfight scenes were all I had hoped. The fighters were fast and maneuverable. They laced the skies with vapor trails as they stalked each other across the skies over cities, towns and country.

But now it is not so much the flying scenes that stand out in my memory. Instead today I remember a scene where a young female officer of the Royal Air Force encounters a badly burned airman on the flight line of an airfield. His face is horribly disfigured. Wincing, she thinks of her lover who is a fighter pilot daily at risk for the same fate.

When I read Reconstruction of Warriors recently I learned that the burned flyer on the flight line was not an actor but an actual combatant in the British air war, Bill Foxley. His wounds were real – not the product of makeup artists.

How did the RAF manage to “reconstruct” horribly wounded flyers like Bill Foxley and return many of them to duty or normal civilian life? The book Reconstruction of Warriors tells the story.

Surgical teams of East Grinstead Cottage Hospital collaborated with the neighboring civilian community to restore both bodies and morale of burned and damaged flyers. The wounded flyers – who adopted the name “Guinea Pigs” due to the new surgical techniques applied to their wounds – participated in one anothers care and provided fellowship and mutual encouragement.

Chief surgeon Archibald McIndoe helped organize them into “The Guinea Pig Club,” a social group that survived and held annual meetings well into the 21st Century.

In short, the joint efforts of the injured flyers, medical staff, and neighboring civilian community made the flyers’ disfiguring injuries and surgical scars a badge of honor.

Therefore McIndoe’s airmen did not have to endure the shame encountered by disabled veterans of the First World War, whom the doctor had been seen begging, selling matches, or killing time on the streets of Britain. He was determined to avoid this for his men. He seems to have succeeded.

The book did my heart good.  It is hard to put down! 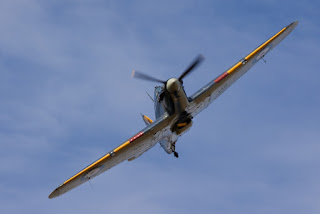 Posted by Douglas Smith at 3:34 PM No comments: