The word “tradition” brings to my thoughts people performing archaic rituals in dusty settings. Being a creature of modern times, I tend not to give old traditions their due; I tend to find many new traditions fascinating and older ones comparatively dull because of their familiarity.

Is tradition obsolete? Modern life is full of tradition. People hatch new traditions daily. Consider one example, the line of electronics fans that assembles at the “Apple Store” long before doors open to introduce a new product. I can affirm that this is a tradition because I see it happen over and over. 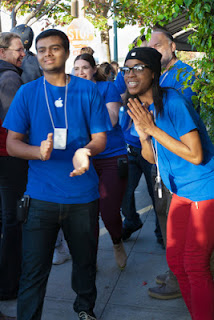 The habit of assigning importance to tradition therefore is not out of date. If tradition has importance, should we modern beings not consider the value of the old ones along with the new?

The tradition that has come to have first importance to me is, the tradition of believing in a God who created me and saved me from paying for my sin with an eternity of separation from Him. Belief in this tradition has saved me from feeling desperate many times, and will do so again.

When I see the way that desperate people live and die and inflict harm on other people in the process, as in the Newtown school shooting, I feel very sad that many in America would curtain from public view the tradition of belief in a Savior God who keeps feelings of desperation from swallowing me. If the tradition of Jesus Christ heartened  a few desperate people, wouldn’t it be worth the irritation it caused some others?

More deeply than I believe in the superiority of the MacBook computer on which I record these thoughts, I believe in the supreme compassion of the God who stooped to make His Son Jesus Christ a man and bring an end to the sin that can give birth to desperation.

I pray that the people who strive to hide news of Christ behind a curtain, while pushing forward news of new digital products, will reconsider. Shouldn’t digital miracles and spiritual ones both be freely available to Americans? As much as I love my MacBook, I don’t know of any lives it has saved. I know many lives that have been saved and renewed by Jesus Christ. I say, let people freely choose among traditions. I think that’s the American way.