It was 1945. World War 2 had just ended. I was 6 years old. My friends and I were airplane nuts, collecting magazines with photos and facts about all kinds of combat airplanes. We had memorized all sorts of information about maximum speeds, service ceiling, rates of climb, and so forth.

We had seen lots of military planes over our neighborhood, making their low approaches to or takeoffs from nearby Dallas’ Love Field.

However, we had never seen an airplane fly without a propeller. Nor one that roared like a volcano.

One afternoon a neighbor across the street shouted something like, “Look! A Jap plane.”

Startled, I looked up and there it was: not a Japanese plane but a jet plane. A jet fighter plane passing low over our neighborhood with no propeller turning.

Investigating later, I learned we had seen the new P-80 “Lightning.”

The same sight would not startle kids today who have seen hundreds of prop-less jet planes pass over.

Still, when the neighbors and I saw our first jet plane we knew immediately we had entered into a new flying age. An exciting age that promised unimaginable new aircraft.

Buck Rogers was no longer just a comic strip! 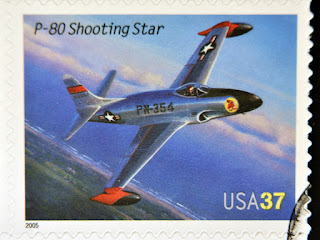 Posted by Douglas Smith at 3:08 PM No comments: