Does Heaven Have a Wall?


By permission of author Jeremy A. Watts, as posted on Facebook™
Saturday, January 12, 2019 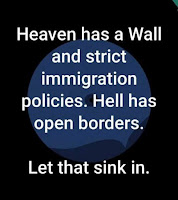 However, I am a Christian and a Bible teacher, so I feel like I should address this particular meme. I’ve seen it quite a bit from my politically conservative Christian friends, and it seems to pop up in the comment section of just about every immigration-related news article I see.

Unfortunately, whoever made this meme does not seem to have read the end of the book. Yes, New Jerusalem has a wall, but it also has twelve gates – and they are never shut. The nations and the kings of the earth bring glory and honor through the gates to the King. Revelation 21 also tells us there is no Temple; anyone who comes through the gates has equal access to the King. Gentiles, women, commoners – all will see the light of the Holy One. And to top it all off, the Spirit and the Bride beckon, “Come.”

If this meme is your clever argument for a border wall and strict immigration policies, just stop it. Don’t pretend this is a “Christian” response. It’s not. Jesus broke into our world to break down the barriers between God and man, not to raise them up. He descended into Hell to set the captives free. After all, it is Sheol that has a great gulf fixed that no man can cross.

This is not a statement on whether or not a border wall for the United States is a good idea. This is a statement about the beauty of the Gospel. This is a statement about a Lamb that breaks down walls with his own blood so we can sit down at a table with the King. Don’t conflate the enemy-loving, outsider-inviting Gospel of Jesus with the broken, exclusionist policies of Caesar. Debate your wall, but leave Heaven out of it.
Posted by Douglas Smith at 4:49 AM